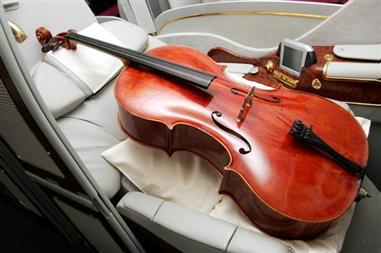 E l’Italia?? The Instruments on Planes campaign, led by the Incorporated Society of Musicians (ISM), reached the ears of parliamentarians through a debate in the House of Lords yesterday. At the same time, leading UK airline easyJet announced its musician friendly hand baggage policy following discussions with the musicians’ body.

The ISM is calling for all airlines to adopt our minimum standard agreement to allow musicians to carry a musical instrument as an additional item of hand baggage on flights, if the item is guitar-sized or smaller.

The campaign, which has already been supported with the signing of a House of Commons Early Day Motion by 28 MPs, was debated in the House of Lords yesterday in a discussion led by Lord Clement-Jones, a Liberal Democrat peer.

Lord Clement-Jones said: ‘There have been terrible cases where valuable and cherished instruments were smashed up in the holds of aircraft as a result of musicians not being able to take them on board as hand luggage.’

He also urged the government to act on behalf of musicians: ‘It may not be possible in every case for the Department for Transport to enforce the clear set of guidelines which it issued in 2009, but can it not at least name and shame the airlines involved?’

Meanwhile, the ISM is pleased to announce that its recent discussions with UK airline easyJet on this issue have led to the company announcing a musician friendly hand baggage policy.

Deborah Annetts, chief executive of the ISM said: ‘We are thrilled that easyJet have taken these steps to help professional musicians travel with their instruments and we look forward to consulting with other airlines in the future about this issue.’

And easyJet’s chief commercial officer, Dana Dunne, said: ‘We are proud to support Europe’s rich musical heritage, and recognise that many professional musicians fly to festivals and concerts all over Europe. We value their business and believe that easyJet’s policy will be music to their ears.’

The ISM will continue to speak with government on behalf of musicians about the ongoing issue of unclear, inconsistent and unfair hand baggage policies which some airlines continue to implement. We are also continuing to urge all musicians and campaign supporters to sign the online petition at www.surveymonkey.co.uk/s/musiciansairlines.

For further details regarding easyJet’s policy, please click here. We recommend ISM members take a copy of this of this statement when travelling with easyJet.