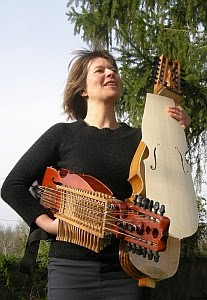 * She began her musical education playing cello in Augsburg.

* 1998/99 she completed her apprenticeship in the Schellong Osann workshop in Hamburg, where she passed the journeyman’s examination

* since 1998 she has concentrated on nyckelharpa making

* since 2001 she has developed a personal nyckelharpa model, and during this time she has also worked in A. Meyer’s workshop (Metz) and in N. Desmarais’ workshop (Grenoble).

In 2007 Annette opened her own workshop in Dole (France) for

* Annette performs as a soloist on nyckelharpa and

* since 2009 she plays chamber music together with Elise Rollin (organ)

* she performs concerts with the « European Network Orchestra » and the members of the « CADENCE » group.

* at the Akademie Burg Fürsteneck (Germany)

She not only teaches playing technique, but also the basics of instrument making and instrument care.

In 2013 she participated in the European Project « ENCORE ».